Tonight is our last night at Leisure Valley RV Resort. We considered staying another night as we're not super anxious to move further east - in light of the nasty weather they're experiencing in Texas. However, after a bit of Googling we determined it's safe to put another 290ish miles behind us and spend four nights in Deming, New Mexico at Lo-Hi RV Park. We stayed there once before on a westward journey back in 2017 and I gave it high marks in the blog I wrote the next day. As a bonus, it's a Passport America affiliate... and at $20 a night, although I don't have a clear recollection of the place, I trust my past impressions. I called this afternoon and made the reservation.

Picacho Peak State Park is about 38 miles east of Leisure Valley RV Resort and just off Interstate 10. Suzanne and I donned our hiking shoes and headed over there this morning after walking and feeding the dogs. 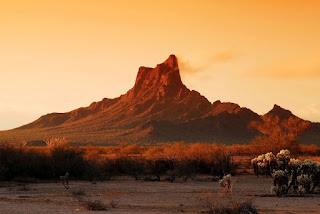 We opted not to hike the Hunter Trail to the peak and instead did the more moderate Calloway Trail which, after an approximate 300' climb, offers a beautiful vista of the valley below and Picacho Peak. 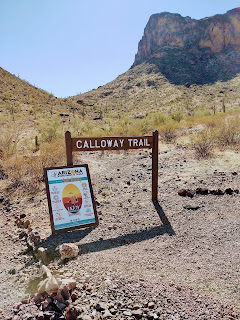 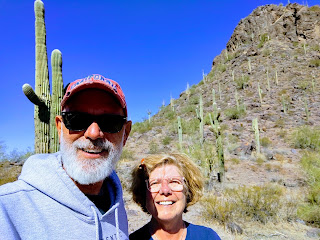 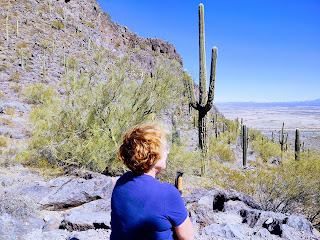 ******
I mentioned in a previous blog that we purchased a dash cover for the coach. 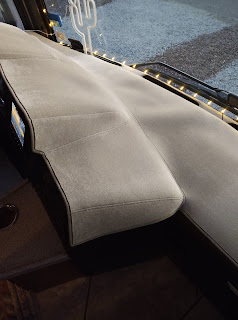 We're very happy with it but its installation presented a minor issue. Our Garmin Dezl 788 Trucker GPS unit lived on the dash by way of a suction cup mount. Before departing Indian Wells we broke out an old weighted beanbag-type mount we used in our previous coach - but the area of the dash on which it must sit is pitched, and during last Friday's drive it kept sliding toward the edge of the dash. We had to reposition it several times. No good.
After a little head scratching I came up with what I think is a pretty good solution.
I modified a bracket that came with our Weboost Cell Signal Booster that I didn't use  Then I grabbed the old beanbag mount and removed four tiny screws - separating the business portion of the contraption from the beanbag. I made a paper template of its base and hole locations, marked and drilled four holes in the modified Weboost bracket, attached the mount to the bracket and screwed the assembly to the back of the cabinet face frame over the driver's area.
As with the exhaust leak fix, I'm afraid I didn't take photos of the process... but here's what I did next...
I removed a section of the dash to expose the wiring I would need to tap into to supply power to the GPS unit. I then removed the left plastic windshield post cover so I could run the wires up behind it.           Attached to the underside of the cabinet floor is a 1.5" furring strip frame. Attached to the underside of that is 1/8" vinyl covered luan. The void created serves as housing for two of the coach's dash radio speakers. I removed the vinyl covered luan so I could conceal the GPS wires within the void.
It all went according to plan until I accidentally touched the negative and positive wires. It wasn't at all a spectacular event - and I really didn't think much about it - but the unit wouldn't power up when I connected it. As it turned out, the problem was simply a blown fuse in the charger cable's cigarette lighter plug.
But the story doesn't end there.
I won't go into details.
Suffice to say I ended up doing something stupid and ruined the charger cable. The thing is, it's not just a charger cable. It's a $50.00 Garmin GTM HD Digital Traffic Receiver. Yeah, I wasn't happy.
Thanks to Amazon Prime's free next day delivery I'm back in business... with minor damage to my wallet and pride. 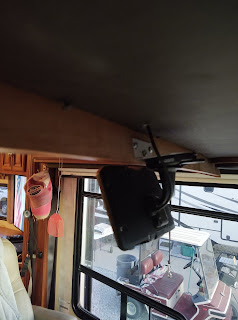 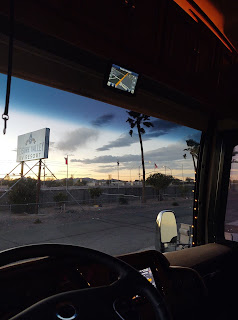 I like it!
So tomorrow morning we head for Deming, NM!
Thanks for checking out the blog!
Posted by On Tour at 7:42 PM