Our plan was to move from Patten Pond RV Park to Bar Harbor Campground where we planned to spend a week before heading for my brother's place in Massachusetts. During a phone conversation with an employee at BHC I had been assured that, even though the upcoming week included the very busy 4th of July holiday, they would have a spot for me. They operate on a first come first serve basis and if I showed up early Sunday morning, people having spent the weekend would be heading out and I could move into one of the vacated sites.
There was, however, another campground about 7 miles from Patten Pond that we had passed several times on Rt.1 on our way to Ellsworth. On one such excursion I took the opportunity to pull into Forest Ridge Campground and inquired as to site availability for the week of the 4th. The young man in the office offered me a map of the property on which he highlighted 4 or 5 available full hook-up spots that would accommodate our 43 foot coach.  It was a nice looking campground and the price was right (about $15 less per night than Patten Pond). I paid for six nights. We would arrive Sunday morning and leave the following Saturday morning - June 7.
Sunday morning we packed up and traveled the 7 miles down Rt.1 where we slid comfortably into site #2 at Forest Ridge Campground. It's the shortest distance we've ever traveled between RV parks.
Sometime in the intervening days a beautiful 1998 Prevost XL 45 had moved into the site beside ours. Temperatures were such that, during our stay, much of our time at the campground was spent inside in the comfort of our air conditioning. The same was true for most of the guests so that the opportunity to meet the owner of the Prevost didn't present itself until Friday, when they were packing up to leave. I'm a big fan of these stainless steel and aluminum clad beauties and would someday like to get a tour of the interior of one. 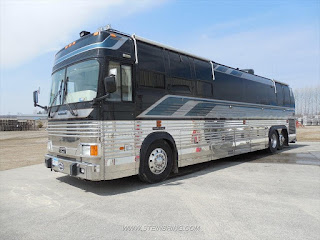 Suzanne had a couple of very busy work days so I amused myself with a hike up Cadillac Mountain with Travis one morning and a 26 mile bike ride another. We drove into Bar Harbor on Wednesday where the dogs and I waited patiently in the car while Suzanne had her hair cut and colored. There is no shortage of lobster 'shacks' along Rt.1 between Ellsworth and Bar Harbor and during our stay we shamelessly sampled lobster rolls from three... possibly four of them.
We had a night of steady rain and I discovered a small leak in the roof where two FM radio antennas are located. I think it was a result of the low hanging branch at Greenlaw's RV Park I mentioned in my previous blog. I decided to just remove the antennas for now and fill the holes with Dicor RV roof sealant. The antennas and mounts are looking a little frazzled. I'll order new ones when we get home. 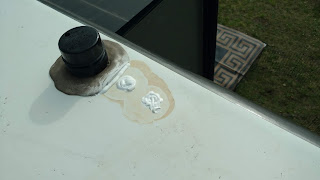 We left FRC Saturday morning as planned, driving 300 miles and arriving at my brother's place in Phillipston, Massachusetts around 2pm where we spent the next week. Well, I spent the week there. Suzanne had business in Boston and Manhattan. I drove her to her hotel in Boston Sunday afternoon where she spent the next two days. She then flew to NYC Wednesday morning and returned to Logan Friday evening. I retrieved her from Logan at 9pm.
I managed to keep myself occupied during Suzanne's absence by completing a few projects on the coach, exercising at the local Planet Fitness, taking a long ride on my bike and spending quality time with family, particularly my mom, who lives with my brother Bob. I really enjoyed spending time with her! 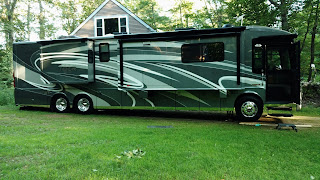 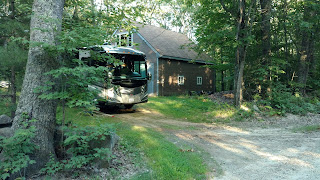 Travis & Winnie had a good time in Phillipston as well... 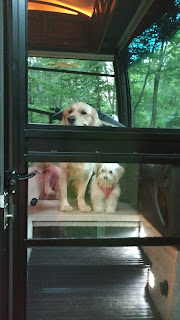 Our journey back to Virginia began yesterday as we left Phillipston and headed for Cape May, New Jersey by way of Easton, Connecticut - where we spent last night at Silverman's Farm.
A few months ago I ponied up $49 and joined something called Harvest Hosts.  Harvest Hosts is a network of vineyards, orchards, farms and the like offering free overnight camping to RVers. We hadn't yet stayed at a Harvest Host and were looking forward to our first HH experience. Silverman's Farm was about 15 minutes off the 'beaten path' but well worth the detour. Our host couldn't have been nicer or more accommodating. We parked the coach in a large open field across the road from the farm stand and a hundred yards or so behind their animal farm. It was mid afternoon when we arrived and still rather warm, so I ran the generator and a/c until the sun set and temperatures dropped to a level where I was able to shut down the genset, open the windows and turn on the ceiling vent fans. The coach's inverter, powered by its six AGM deep cell batteries is able to power everything in the coach except the air conditioners.
After walking the dogs and getting things set up we walked over to what Silverman's calls their 'farm stand'. It's really more of a farm stand/gift shop/florist/craft shop/pie, ice cream & preserves emporium. It was really a cool place. We ended up buying a cherry pie, a quart of Tahitian Vanilla ice cream, a loaf of cranberry bread, blue corn tortilla chips and a jar of sweet vidalia onion salsa. Yum. 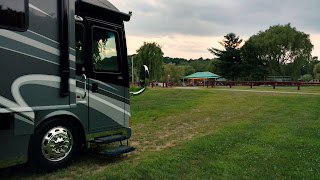 Our spot at Silverman's

Oh, a week ago I decided to order a Garmin dezl 770LMTHD, a truck specific GPS. We've been using Google Maps and it's just not up to the task. We've ended up on too many size-inappropriate roads, detoured around unexpected low overpasses etc. The coach has in-dash navigation but it too is unpredictable and has gotten us into some tight spots. I had read lots of good things about the Garmin Trucker GPS and finally decided to pull the trigger - and take some pressure off my navigatrix... Suzanne. 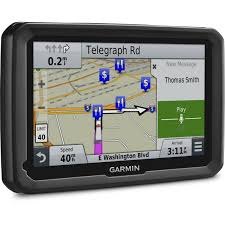 We used it for the first time yesterday and it did a great job and raised my comfort level several points! The drive from I-95 to Silverman's farm took us on some winding rural roads but I knew, because the coach's dimensions and weight had been programmed into the unit, we wouldn't be asked to navigate anything that wouldn't safely accommodate our rig. Maybe the best $375 I've ever spent.

Today, once again, the new Garmin Trucker GPS performed flawlessly. It rained for a good portion of our 210 mile trip, spoiling the wax job I had performed in my brother's driveway. 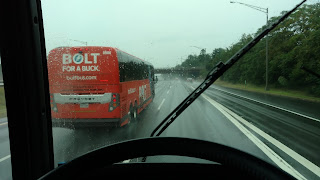 I had planned to take I-287 over the Tappan Zee Bridge, thereby avoiding the very bumpy and heavily trafficked Cross Bronx Expressway and George Washington Bridge. But at the last minute, seeing that Sunday morning traffic was lighter than anticipated, we decided to stay the course and continued down I-95. We had only a brief slow down during the approach to the GWB. 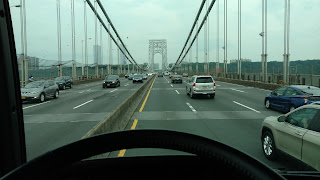 We stopped at a service area about 15 miles from our destination and topped off our half empty diesel tank. I was expecting something in the neighborhood of $3.50 per gallon but was pleasantly surprised at the $3.15/gal price tag.

Tonight we are in Big Timber Lake RV Resort in Cape May Court House, NJ - a Sun Resort. BTLRVR is a Passport America RV park and I was able to get 50% off the nightly rate for our entire 5 night stay. According to the PA notes on the park, the 50% discount is only supposed apply to the first two nights. But when I made the reservation earlier in the week, I was quoted a price that reflected a 50% discount for the entire stay. I didn't argue the point.