It's been quite a while since I've made an entry in the blog!
We're still at Indian Wells RV Resort. Since our last visit here in 2015, it was bought by Sun Resorts, a nationwide network of RV resorts. We've stayed at Sun Resorts in the past and they're generally very nice places. This one is a little threadbare but it seems like Sun Resorts has plans to make improvements.  There are three nicely maintained swimming pools, a fitness center, club house, laundry facility, and two dog parks. Two of the swimming pools are located in the interior section of the park, not far apart. The other is at the far... I guess it would be Southeast corner of the park, adjacent to the fitness center. Our site is located on the western boundary, about half way between the front entrance and the back of the park... so pool#3 is a bit of a hike - but it's the least crowded and the largest of the three. I think that's because there is no Jacuzzi and that it's not as convenient to most guest's site location. I put my towel, ipad, water bottle etc. in my back pack and ride my bike over to #3 - and chain it to the fence!

As you can see, even on the nicest of days, pool #3 is never crowded. In fact, I'm usually the only one there. 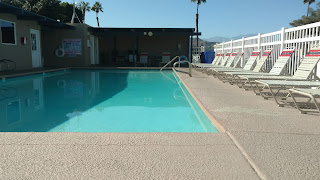 We got new bikes. I bought a Trek fx3 Hybrid at Palm Springs Cyclery in Palm Desert ... 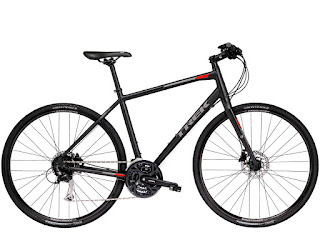 ... and Suzanne got a Schwinn Pathway at Walmart... 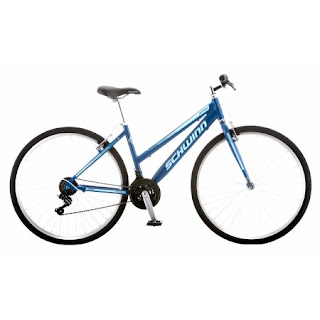 I tried to convince her to get something at P.S. Cyclery but she doesn't ride all that much and insisted on something a little less expensive. Still, it's a nice bike and she's very happy with it.
Aaron has been going out to our house periodically to retrieve and forward our mail. I had him include my Kryptonite motorcycle lock & chain (also known as the Fahgettaboudit chain) in the last shipment. 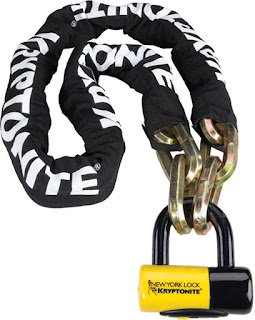 It's made of case hardened steel - and pretty much indestructible. You'd need a grinder a cutting torch and some serious explosives to even put a dent in this bad boy. I feel pretty confident the new bikes are secure. Kinda pisses me off that our old bikes were stolen and that I have to be super diligent about always locking up the new ones. But, unfortunately, this is the world in which we live.

There's been a slight clunking going on in the front end of our towed vehicle (referred to as a toad in the RVing community). I climbed underneath a couple weeks ago and saw that the boot on the right CV axle was torn and had pretty much purged itself of the grease inside. I called Jim, my ace mechanic brother, and he suggested I replace the entire axle rather than just the boot. They're not very expensive and there's just as much work involved in replacing the boot as there is in replacing the axle. I was going to take it to a mechanic but I like a challenge, so I ordered the axle and started watching YouTube videos.
The part arrived in a little less than a week. My jack stands are back in Virginia in my garage along with a couple of other tools I needed for the job. Luckily, there's a Harbor Freight Tools just a mile or so down Hwy 111 where I found just what I needed - and cheap. Incidentally, there was an attempted armed car robbery across the Harbor Freight parking lot a day or so after my visit that had a not so happy ending. Read about it HERE.
There were setbacks and I almost ended up taking the car to Pep Boys. I ended up calling Hector, a mobile mechanic I found online. He was supposed to be at my place at 8:15 last Friday morning but had an emergency road call and sent me a text message saying he'd be about an hour late. While I waited for his arrival I kept working at getting the old axle out - which was ONE of the problems I was having. Finally it popped out! I called Hector and told him not to bother coming and was able to finish the job myself (after another couple of texts to and from my brother). 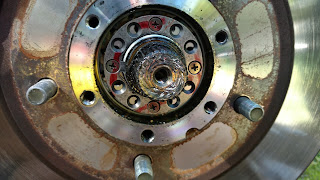 End of the CV axle before removal

When we first arrived here at IW I extended our patio awning. The end of the right support arm ended up slightly inside the uppermost branches of a small grapefruit tree. Well, the wind came up a couple nights later and, not thinking, I hit the button inside the coach's entry door to retract the awning. Much to my dismay, one of the small branches got caught between the support arm end and the tube onto which the awning rolls. I re-extended the awning and pulled the branch out and was able to retract the awning - but could see that something wasn't quite right as it wobbled its way back into the closed position. I deployed it a few days later and it kinda looked okay - so I kinda put it out of my mind. When the wind came up a couple days ago I hit the retract button. The support arm broke loose of the 15' tube and that end of the awning came crashing down. It didn't hit the coach and no damage was done, but I wasn't a happy camper. Suzanne came out and, with her holding up the broken awning bar end, I took the retaining screws out of the other end so we could lower and secure it to the coach with bungee cords. The wind was blowing pretty hard.
There are cups on the ends of the support arms into which the awning roll bar fits. When the tree branch had become wedged between the bar and support arm it ripped out a chunk of the aluminum cup - a section of the cup where one of two roll bar retaining screws was located. You can see the missing chunk at about the 8 o'clock position in this photo... 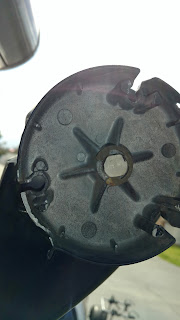 The cup and roller bar end were also bend slightly out of round. After doing some prep work, with a borrowed step ladder and the help of Mike, one of my neighbors, I relocated and drilled new retaining screw holes in the cup and reattached the bar and support arms. I now have a functioning awning. For good measure, I even added 2 more screws to each end. Two screws in each end seemed a little under-engineered to me. 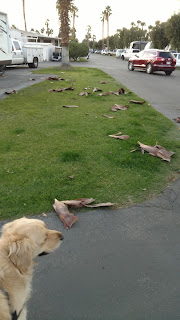 Unfortunately, across the road, these remained standing... 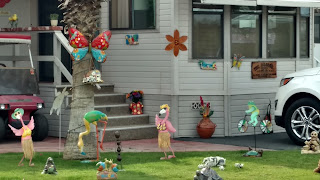 Oh, the hub on the driver's side tag axle on the coach has been throwing oil for a while now. It's not much, but enough to make an otherwise gleaming rim look not-so-nice. I removed the hub cap and replaced the end plug with one I bought at a big truck supply place nearby. However, after  a subsequent inspection I'm thinking it's the drain plug located on the side of the assembly that is leaking. I ordered a bag of four replacement plugs on ebay - but as the plug, in it's current orientation, is in the six O'clock position, I'm not going to replace it until I'm able to move the coach so that the plug is at the top. Then I won't have gear oil all over the place... get it? 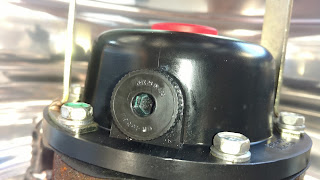 On Friday we're flying back to Virginia to take care of a few things. We'll be returning to IW on Monday. Travis will be staying at The Village Pup in Old Town La Quinta.  He's already had his two day orientation visits and has passed muster. It's a cool cage free boarding facility where the dogs live, play and sleep together (with human supervision, of course).  They have four live webcams - so we can check in on the big knucklehead whenever we want. So can you if you click on the Pup Cam link on their website!

Thanks for reading the blog.