I wrote a really long blog (maybe the longest I've ever written) a couple weeks ago and, assuming it was saved (as I had been saving my work every couple minutes) and frustrated that pictures I was trying to insert weren't loading, I refreshed the page.
Poof!
It all went away.
Two hours worth of work... up in cyber-smoke.
I had neither the mental energy nor the desire to attempt to recreate everything I had written... and I won't attempt to do it now.
In a nutshell...
We arrived at Motorcoach Country Club in Indio, Ca. on December 29th and spent a week. Allie and Andy spent a couple days of their multi-destination honeymoon about 30 minutes away in Rancho Mirage and we were able to get together with them for dinner and for a few cocktails & cigars back at the coach one evening. They had a great time on their honeymoon - which began in Anguilla and ended in San Diego by way of Napa and Rancho Mirage.

A few pictures of our time at MCC... 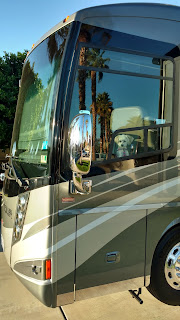 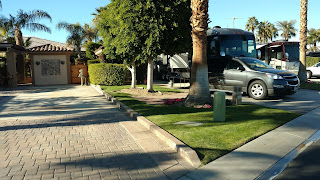 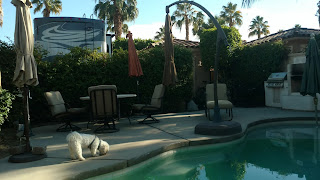 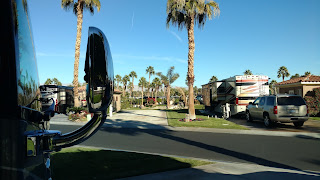 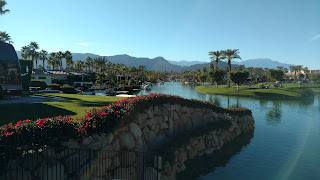 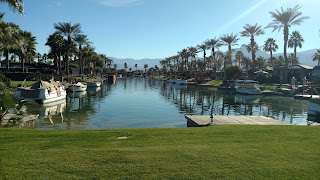 It's a pretty nice place.
We hauled anchor and drove less than a mile to Indian Wells RV Resort last Saturday 1/5. The term "Resort" is often used to describe RV parks. Motorcoach Country Club is truly a resort - Indian Wells... not so much. It's not exactly a Hee-Haw-Hell. But a resort??
Umm, no.
At any rate, we're here until March 31. Staying that length of time at MCC would have been outrageously expensive. IWRVR is undergoing a much needed face-lift and is noticeably improved since we were here last winter. I tried to reserve a spot at a nicer RV "Resort" a few miles away but apparently one needs to book one's stay at Indian Waters RV Resort more than 6 months in advance.
Suzanne is working part-time (3 days a week) for the firm she's worked for for the past couple of years. She's up at 5:30 on Monday, Tuesday and Wednesday in order to be in sync with her colleagues in NYC and done at 2:00pm. A pretty good schedule.
I've been keeping busy doing odd jobs around the coach - making minor repairs, cleaning rims, cargo bays etc. We had our friend, Tim over for dinner one night last week and had a great time visiting and watching the Clemson/Alabama game. We met Tim when he was parked next to us in site #50 last year (we're in site #51). He now resides on the 'other' side of the park - a much tonier, more upscale neighborhood (not really).
It's nice being back in the desert. Although temperatures have been about 10 degrees cooler than average, it's still much more temperate than Northern Virginia at this time of year ...

... and the forecasters are predicting a return to mid to upper 70s by Saturday.

A couple other highlights since our arrival... 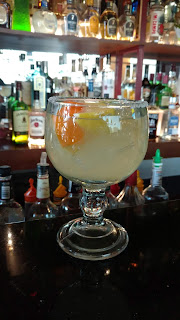 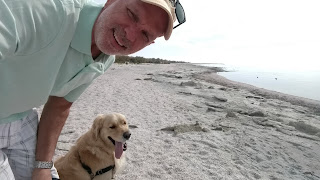 A Trip to Salton Sea (If you're thinking of making the pilgrimage, don't bother)