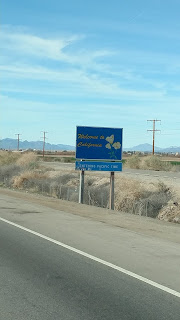 It's been a while since my last blog entry.
So we have some catching up to do...

We arrived safe and sound at Indian Wells RV Resort on Thursday, January 30th - three weeks and a day ago, where site #59, having been hosed clean the previous day (thanks to our friend, Tim) sat vacant awaiting our arrival. Site #59 is a back-in site so after checking in at the office I disconnected from our Chevy Traverse "toad" and Suzanne followed me as I navigated to our parking spot for the next two months.

We're just a few sites away from site #51 where we've stayed during our past two visits. It's a good spot with the same beautiful view of the San Jacinto mountains through our windshield as site #51. The only issue is that our passenger-side neighbor's slide overhangs our patio by about 20 inches. I spoke to her about it. She was very nice, acknowledging that there was, indeed, an encroachment issue, She would have gladly moved her trailer over a couple feet if not for the fact that she has no vehicle with which to do it. She lives here full time and had the trailer delivered six months ago by the seller - who should have paid a little more attention to it's positioning. 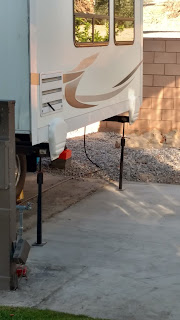 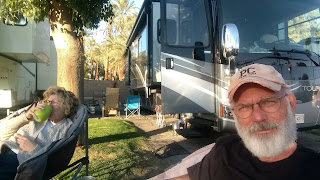 Somewhere between Casa Grande, AZ and Indio, CA I lost the driver's-side tag axle hub cover, retaining bolt and bracket. At first I thought the bolt had simply loosened and fallen out - but upon a closer inspection I realized two weld points on the mounting bracket had failed. I ordered new parts from a Freightliner dealer in Fontana, CA. - about 60 miles west of Indio on Interstate 10. 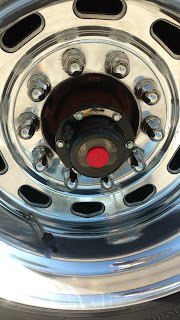 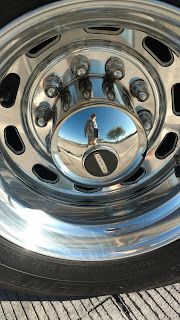 Our son, Aaron and his lovely wife Molly flew out on February 5th to spend some time with us. Molly had never been to California and was particularly interested in visiting "America's Happiest Place".
No... not the Badlands Landfill of Moreno Valley... 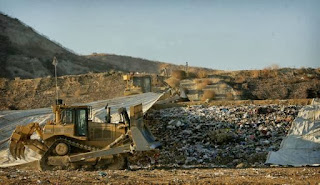 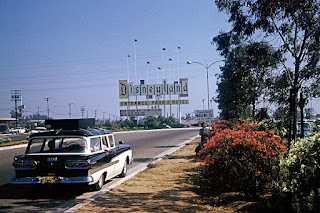 So the morning of the 5th, while Aaron and Molly winged their way to Ontario International Airport, Suzanne and I made our way to Orange, California's Orangeland RV Resort (about three miles from Disneyland).

Traffic was about what you would expect... 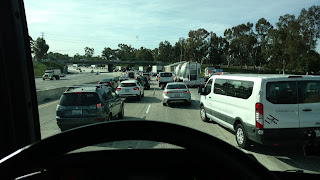 The RV park. however, was much nicer than I expected! 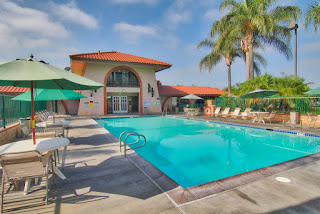 Nicely maintained, very reasonably priced and in such close proximity to The Magic Kingdom, I would absolutely recommend Orangeland RV Resort to anyone visiting this part of the world in their RV. There were dozens of fruit trees heavy with ripe oranges, tangerines, lemons, limes and grapefruit from which residents were encouraged to pick. There were even fruit-picking-pole-basket-things available at the office to assist you in your citrus picking!

Aaron & Molly Ubered from ONT to Orangeland arriving about an hour or so after we did so Suzanne and I had plenty of time to get settled in and ready the coach for visitors. They were a bit peckish upon arrival so we set out and consumed some veggies, dip, crackers, cheese and such... then it was off to Disneyland! 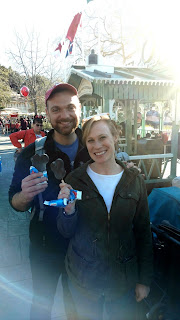 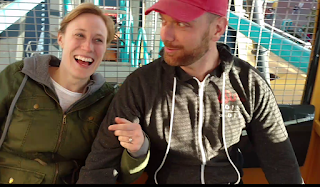 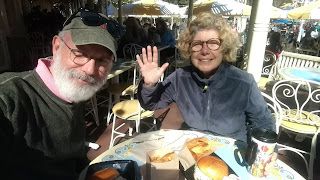 We spent the rest of the day at Disney's California Adventure ... which was the Disneyland parking lot the last time we were here - probably 30 years ago. After a long day of fun we made our way back to Orangeland and the coach, returning the next morning to spend the day at Disneyland proper. Back in the 80s when we lived in Southern California Suzanne and I, sometimes with friends or family, enjoyed spending an occasional day at D-land. There was definitely a feeling of nostalgia as we walked around the park this time. There have been a lot of changes in the years since our last visit - but much of it remains the same.

A photo from a previous visit... 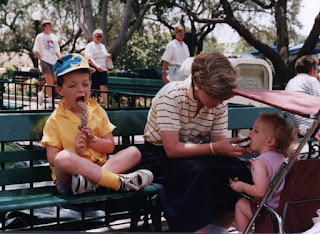 Friday morning had us packing up and heading for California's Simi Valley and The Ronald Reagan Presidential Library. 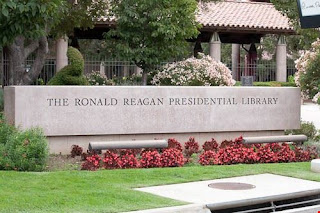 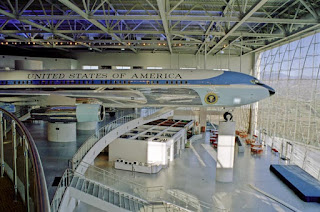 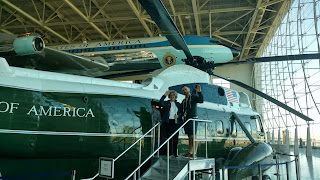 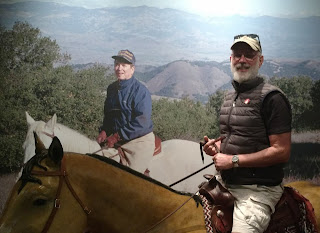 A leisurely ride around the ranch with Ron.

A really cool place to visit with incredible vistas of the valley and surrounding hills. The Reagan Library is a beautiful, educational and inspiring tribute to a great American President. Drop in sometime if you have the chance. Regardless of your political leaning, it's one of those places every American should visit.

Friday night's destination for the coach was a premier berth at the Malibu Beach RV Park. Overlooking the Pacific Ocean and located on Highway 1 (the Pacific Coast Highway), MBRVP is an incredibly picturesque 'glamping' venue. Having eaten a late lunch at The Reagan Library, none of us was very hungry after arriving at the park. An evening snack, watching the sun set over the Pacific from a semi-circle of chairs around a propane fire ring in front of the coach, a little scotch, a couple cigars, the sound of waves crashing on the shore below... with people you love. I'm not sure it gets any better. 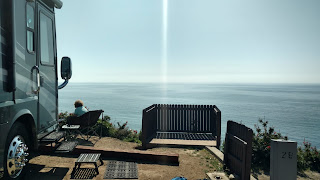 The next morning we hopped in the car and drove a few miles down PCH to Malibu and had breakfast at a little cafe whose name I can't remember - and walked along the beach. 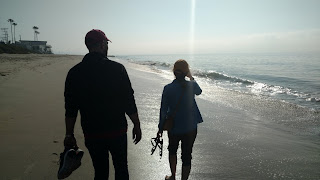 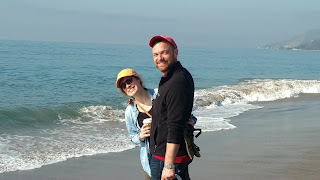 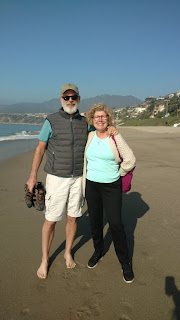 The perfect ending to our three day road trip with Aaron & Molly!

We arrived back at Indian Wells RV Resort Saturday afternoon. That evening we all went out to dinner at one of our favorite Mexican restaurants in the area, Casa Mendoza. Sunday morning Aaron & Molly hiked the 'Bump 'n Grind' trail then, upon their return (and after their showering) we picked up a couple pizzas at Mario's Italian Cafe in La Quinta and headed over to Suzanne's mom's place where Molly met her Grandmother-in-law for the first time, along with Suzanne's sister Jodi, her daughter Kayla and son Ryan. After a great visit with family we returned to IWRVR for a relaxing evening in the coach. I installed the new 49" QLED TV I had ordered a week prior and which had arrived at Jodi's house during our three day sojourn. Then, while Suzanne watched the Academy Awards on the new TV, Aaron, Molly, Ryan and I played 'Codenames', a fun game Molly and Aaron  bought after their hike earlier in the day.

Monday morning A&M grabbed a quick workout at the RV park fitness center then, wanting to see what all the hubbub over the movie 'Parasite' was about we were off to the movie theater in Palm Desert. While we all agreed it was a good movie, none of us thought it deserved the award for Best Picture. I thought 'Once Upon a Time in Hollywood' was a better movie and A&M had seen '1917', which they felt was superior to 'Parasite'.
Different strokes.

American flight 269 was scheduled to depart Ontario International Airport at 11:55am so we were on the road Tuesday at 8:30am for the 1hr30min drive west to Ontario. About 30 minutes from the airport Molly informed us, after checking flight status, that their flight had been delayed one hour. Then two. They would be unable to make their connecting flight in Phoenix. We continued to ONT where Suzanne and I dropped A&M off curbside and waited in short term parking while they tried to make alternative arrangements. They could have taken their rescheduled flight but wouldn't have been able to leave Phoenix until midnight! Who wants to do that? As it turned out, there was a direct flight out of LAX departing in a few hours. Thanks to HOV lanes and relatively light post commuter traffic we were able to drop them at the LAX American terminal a little over an hour later with plenty of time to spare. Suzanne and I arrived back at IWRVR around 3:00pm - a little more drive time than I had planned on but hey... whatcha gonna do?
On our way home we stopped at the Freightliner place in Fontana and picked up the parts I had ordered then had lunch at Farmer Boys.

Had enough??
There's more.
It's been a while since I last blogged.

In other coach repair news, the on-board fresh water pump has been acting up. Actually, I don't think it's the pump. After a lot of head scratching and Googling I'm thinking it's this little gadget... 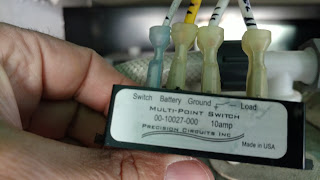 I could describe the symptoms and why I think this 'latching water pump controller' is the problem but you'd be bored. The part is supposed to arrive tomorrow. I'll let you know in my next blog whether it worked out or not.

On Friday the 14th Suzanne had taken the car to spend some time with her mom, which was fine, but I hadn't gotten her anything for Valentine's Day. Luckily, a box of candy, a card and a dozen roses fit nicely inside a back pack. And I got a little exercise pedaling my bike to Ralph's Supermarket. 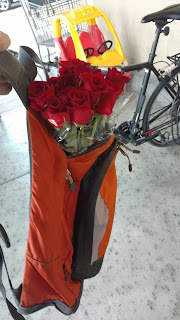 Last Saturday night there was a pierogi dinner at the clubhouse here at IWRVR. Suzanne's brother, Doug was here visiting from Altadena for the weekend so the three of us and our friend Tim packed place settings and beverages and trudged up to the clubhouse at the appointed hour. Christmas day last year Molly taught us how to make pierogies and it was mostly at her urging that we agreed to attend last Saturday's dinner. There were sauerkraut pierogies and potato & cheese pierogies. Both were delicious and we had a good time getting to know some of the other residents. 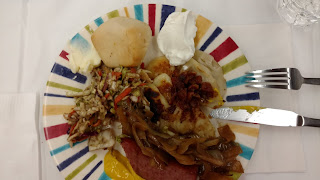 Suzanne and I love Mexican food and Wednesday night we had dinner, for the third time, at Casa Mendoza. 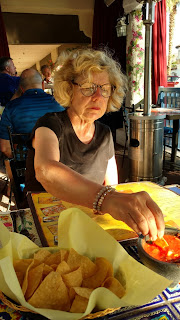 I took a 16 mile bike ride on Tuesday, a 20 mile ride with Tim on Wednesday and a short 5 miler today. Suzanne and I have also been going to the gym. I transferred my membership to the Planet Fitness here in La Quinta when we first arrived in town. Members are able to do that every 90 days so I'll switch it back to Stirling, VA when we leave in April.

Last but not least...

We drink a lot of bottled water and for a while now I've been debating about what to do as an alternative. The city water here at IWRVR is of good quality but we do a lot of traveling and every time we change locations we're connecting to a water supply we know nothing about. We use city water for showering, laundry and washing dishes but drink only bottled water. I considered purchasing a Berkey water filter but didn't want to take up valuable counter space. 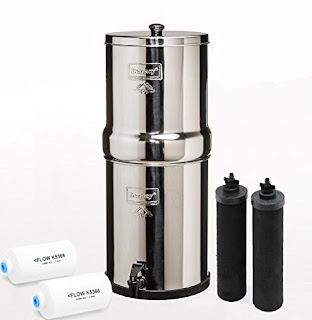 Instead, I decided to purchase and install a reverse osmosis system in the cabinet under the galley sink ... 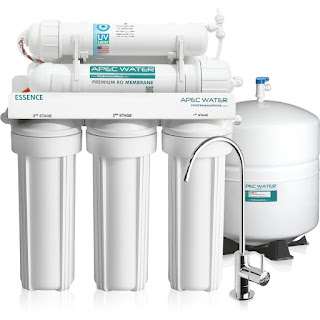 We've been using it for three days and are very happy with the results. The water tastes great and we feel good about not having to recycle all that plastic.

So, that's about it! I'm gonna try to blog more often so I don't have to spend so much time catching up -  and trying to remember stuff. 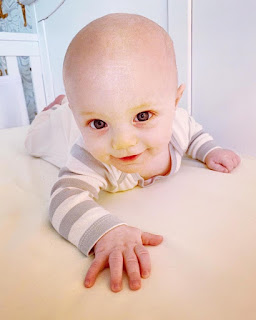