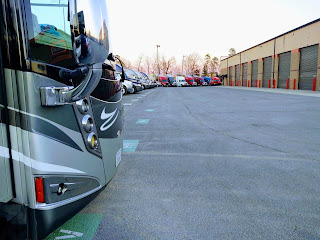 There's a very nice nature trail in Ringgold, Georgia that runs along side the South Chickamauga Creek and this morning Suzanne and I decided to explore it.

I found a couple of these pictures online. Hence, the greenery in winter... 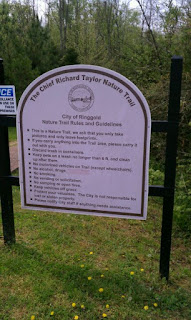 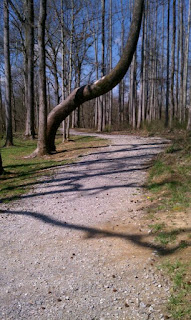 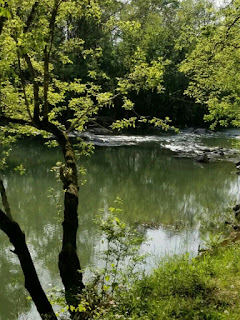 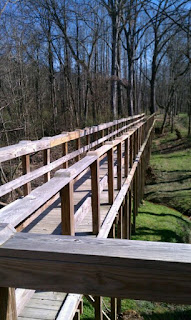 At 1pm, upon completing our 2ish mile trudge and returning to the car, we drove into town and had lunch at a lovely little restaurant called The Homeplate Grill.  It was a beautiful, warm, sunny afternoon and there were two outside tables, neither of which were occupied, so after checking in with the hostess
we seated ourselves at the table to the left of the restaurant entrance where the sun was a little less intense. 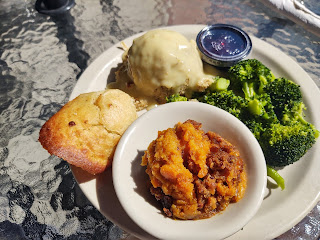 Some fine southern fare
******
Back at the coach, at around 3pm, I called the service desk at Premier Truck Group to ask if they had some idea as to when the parts would be arriving tomorrow so that we could be prepared to evacuate in a timely manner.
"Les is on his way down to your coach to explain the situation."
Uh oh.
The "situation" as explained by Les, the RV tech, is as follows...
It seems that one of the sections of pipe needed for the repair, specifically the pipe that connects to the turbo, doesn't exist. It is nowhere to be found in the entire US Freightliner inventory and has to be fabricated at the plant. According to Les, fabrication, shipping and installation could take up to two weeks.
We are currently about 580 miles from home, my daughter has a few carpentry projects she wants me to complete before the baby comes in mid-April, we're getting anxious to see our kids, kids-in-law and grandchild, there's an upcoming doctor appointment, and we really don't care to spend a couple (or more) weeks hanging out in the greater Chattanooga area.
We've begun readying the escape pod and will head for home bright and early tomorrow morning. When the repair is complete we'll either drive down to retrieve the coach or board the dogs and fly down. We're not really upset about the predicament we find ourselves in and actually consider ourselves lucky that it happened where it did. We could have been in Van Horn, Texas or Delta, Utah or any number of remote locations far from the nearest big rig repair shop - much less an honest to goodness Freightliner facility! It could most definitely be worse!
It's all good.
Thanks for checking out the blog!
Posted by On Tour at 4:46 PM